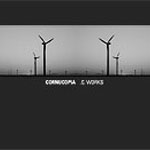 2CD, Zeromoon, 2005
www.fukkgod.org/cornucopia (Link not exactly dead, but not much info anymore)

Impatience. A blessing or a curse? On this occasion a curse. When I first got my hands on this CD I looked to find it was a double album (in very nice packaging too!). Saw the first CD was one track of 37 minutes and decided to skip that and go to the second CD, which is a fine example of supporting your friends’ music, by releasing their music on your own release. Clever planning.

However I have now found that the second CD, although good of Cornucopia to get more music out there, is somewhat unnecessary, as Cornucopia’s “.C.” is nothing short of spectacular. I have had shivers running up and down my spine whilst listening to this track. It is genuinely really rather frightening, but in a way that you have to keep listening to see where the track goes. I would love to hear this in a live setting, as if it creates this sort of emotional response from CD, who knows what it would be like live? Personally I’d recommend this release on the strength of this track alone, all 37 minutes of it.

The second CD isn’t bad, there’s just nothing that particularly grabs attention, aside from clever titles. There is something to be said about electronica – you get lots of really strange (and long) titles. Stand out tracks though would be Kim Cascone’s “The Brides Glass Domain” and Ultra Milkmaids “He-Riko”. As previously stated though, get this release for “Cornucopia” alone – it is utterly fantastic.