OK. I admit it. I am an unrepentant fangirl. Yes, most of you realise this, but a band has not hit me so hard in recent years that I’ve gone from feeling decidedly meh to bootlicking levels of worship in such a short space of time. That, and usually, I rarely review remix CDs as I find it a near impossible task to listen to one in full. Remixes are interesting little additions and diversions taped on to the end of a proper release usually, so for them to be the very core of a release is a strange one for me to write about.

3TEETH Remixed, as a whole is a solid collection of remixes, some are utterly brilliant (I’m going to focus on the best ones) and some a bit patchy, or not doing much with the original source material. When I listen to remixes, I want to hear something mind-blowingly different. Something that makes you question what you heard entirely.

In no particular order of preference (although in order as they appear on the release), these are my stand out favourites…

I may need to let twitter do the talking here…. 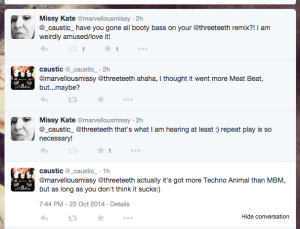 Yes. I believed Caustic had gone all booty bass (I wouldn’t put it past him for a second! You’ve heard ‘Lady Business’ right? :)) Matt’s remix is so goddamn funky, although listening to it again now I can see where he’s coming from with his relation to Meat Beat Manifesto. More breakbeat than booty…..break booty? Oh no wait…..moving swiftly on!

This one caught me unaware and this is what a remix is supposed to do. Really mess with the original to create something so totally out there that it could well be a track of its own. Massive dubstep beats and heavy as hell. If this isn’t massive in the clubs, then there is something terribly wrong.

I loved this remix from the moment I heard it and that was when I first started listening to 3TEETH, as I heard this on their soundcloud account, and even featured it in my original review. What does it for me is the slinky synth lines and yes, another that will easily fill the dancefloors. The original of Nihil is properly brutal, and it was the brutal noise that lured me in in the first place, so to turn it into something quite so suited for nightclubs is quite an achievement. Especially for me to nearly favour it over the original.

I know this doesn’t really dig too deeply as a review. As I said I find it hard to review remixes, but there are so many good tracks that it is near impossible to ignore. Diamondstein, Mircalla and Freakangel are also very good remixes, BLKHRTS seems a little unfocused with too much going on for my tastes, but it’s not bad at all and I think a lot of people will like it due to the interesting crossover of rap and industrial. This really is a great release, not just for home listening but for the clubs as well. Also good if you want a 3TEETH fix and don’t have time to listen to the whole album; I admit to being a purist and like to listen to albums as they were intended and find it a little disorienting to listen to an album on shuffle.

If you have managed to miss my constant chattering about this band, this is the time for you to get in to them. They are a breath of fresh air, and the remixes make them even more so. They’re playing Resistanz festival in Sheffield next April. I’ll see you in the pit!