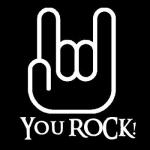 I thought it was suitable to quote from ‘Almost Famous‘, even though that particular line has very little reference to rock stars, there is something that rings true about it.

Yup, this blog post is directed at musicians, not just rock musicians, although, in my experience, I’ve found rock musicians to be the absolute worst in terms of ego mania, but some have surprised me. An example of surprise was meeting the lead singer of Dear Superstar last week. Never really cared much for their music, as they were always my sisters band – she freaking worships them! I always found them entertaining and enjoy a lot of their songs, but sometimes their lyrics tended to upset some of my feminist tendencies, and I always thought that the lead singer was a-grade rock star – he has such character on stage, that I feared he would be very much like that off it, and I couldn’t have been more wrong. He was quite happy to talk to me and was happy that I was in to the music and enjoying it and we had a drink together and he gave me a hug when I was leaving – he was so lovely. The one member of the band I was absolutely there to see seemed so disinterested in meeting me, that since then, I haven’t felt much urge to listen to their music, whereas I can’t get enough of listening to the new Dear Superstar album.

What happens with me is that if the musicians I really like are actually interested in me and take time to speak to me, my loyalty to them increases ten fold. If you shrug me off in order to see what skinny, 16 year old will drop her knickers for you, then you deserve whatever you get, and yeah, you’ll meet people like me on your long journey to the bottom – you need to construct friendships with those who will stick by you, not necessarily pretty little things who have the rock star image – that won’t last. I’ve been going to gigs since I was 14, and I have seen hundreds of bands since then and some have faded in to memories, some are still going strong, and I have met many musicians, some complete wankers, others utterly lovely. To this day I will still say that Tura Satana were a band who formed a lot of my interests in my late teens, and I still remember meeting them for the first time, a week before my 18th birthday, and remember Tairrie B actually sitting on the floor next to me to talk to me as she liked the furry coat I was wearing. I have met her many times since then and have always enjoyed the fact that she remains interested in what her fans have to say. I may not necessarily listen to her as much as I once did but I will always revisit her music and feel happiness listening to it.

And then there are those bands who are utter wankers to their fans. I heard a story once about some girls who spent the entire day queuing for the Kaiser Chiefs, and then said band were utter arseholes to them. I’ve never liked that band so wouldn’t listen to them anyway, but, for any band, all you have to do is piss off one, what you see as, insignificant fangirl or boy, and the next thing you know, your name is utter shit, and particularly so with Twitter now. I never had that when I was a teenager but there was a strong scene, and people talked at gigs and bad news travels fast. I’m not going to say who the band member was who I found to be a bit of a prick, who inspired this post, and I won’t say anything on Twitter either, but I’ll be less bothered about meeting any of them at their next gig, if I do go. Until a few days ago there would be no question I would go to any of their London dates; I’d be getting tickets as soon as I knew about them, but less fussed now. If they continue to be that way with other fans, no matter how utterly talented they are, it’ll be difficult without the people who buy their CDs and go to gigs to push them on. A fan isn’t insignificant, and shouldn’t be treated as such just because they are getting between you and a lovely lady or whatever.

As I said previously, it’s not just rock stars who can be like this, it can be any musician. Luckily the gigs I go to now mean it’s easier for me to meet people that I like, mostly because they are music fans themselves, and they know what it’s like to be slighted or not spent time with after spending hours outside a venue; although I’ve met some ebm bands who are a bit twattish in my mind – they were nice at the beginning, but now are a bit egocentric. Feel free to guess! It shouldn’t be too hard 🙂

I’m mostly past people being pricks to me now. I’m old enough to know that eventually these bands will get what’s coming to them. Sure, they may end up huge, but as with everything in life, there will be a downturn in favour, and the people you slighted on your way up, will almost certainly still be around on your way back, and they will remember, as I remember all the bands that were (and continue to be) good to me, or bad. I’ll not be a prick back to them, but I will consider whether I genuinely need their new CD or not, and I could say a few things on twitter, and for some reason, some people seem to think my opinion counts for something – I’m not sure what that is, but people do listen to me (I suppose being a music reviewer, or ex music reviewer, carries some weight somewhere!). So whilst all these new up and coming bands are trying to build a loyal fanbase, I’d like to give them a word of advice, be decent – that’s all – sure you’re a rock star and you want all the trappings that gives you, we get that; but don’t go chasing that, when there is an actual music fan that just wants a few minutes of your time, and maybe a signature on their CD. It’s not a hard thing to do, but it’s a difficult thing to remember sometimes. Put your ego to the side and be cool, this will enable your songs to be soundtracks to people’s teenage years, soundtracks to good times and memories and people will go back to your songs time and time again and remember you as something awesome, and maybe they might just be the one person, the catalyst, that fires you on to greater things.