Gazelle Twin is an artist I’ve wanted to write about for some time. Their music came to me with their 2nd album, Unflesh, like a near religious experience. Everything I heard seemed like an amalgamation of everything I love about electronic music, and expressing this can easily come across as a little bit fangirly rather than a broad and detailed look in to the work of an outstanding artist. I am increasingly interested in electronic composers and the roles of identity within music. The Quietus, a long-time supporter of Gazelle Twin produced an excellent video on this with Benge, John Foxx, Gazelle Twin and Scanner which is definitely worth watching if you have a passing interest in this subject. Characters and identities are something that can be much more easily created within electronic music, and Gazelle Twin is an excellent example of this. As the character for the Unflesh album, they wear a blue hooded tracksuit – perhaps similar to something worn for school sports/physical education (a representation of puberty perhaps?) and a mesh mask that covers their face. It limits the personality of the character, representing as a purely physical form, which certainly adds to the themes in the music. Having seen them live twice as this incarnation, there is something deeply unsettling about how they move with the music; it’s almost mechanical, like I am just a body and nothing more, but overlay the music on to this and the discomfort works. The lack of personality, helps you to understand the music all the more. When you see live bands, you may have an interest in the band personally which may overshadow their music, this way you don’t get to imprint any ideas you may have held previously – you don’t know the person, so listen to the music, and see what that character has to say.

With this article, I have chosen to look at all their releases to see how the character of Gazelle Twin (usually known as Elizabeth Bernholz) has grown musically, themes explored and what the future could potentially hold.

The beginning of the Gazelle Twin ‘project’ came about after being inspired by a live performance by Fever Ray, which comes across in its own way, but I loathe saying an artist emulates others. Yes, of course it is going to happen but it is always best to look at the artist as they truly are, and Gazelle Twin is definitely in a league of their own. The Entire City has this strange, ethereal beauty to it; swathes of beautiful vocals with lots of synth work to pull in even the most hardware nerdy. This may sound like a description of any artist with any kind of leaning towards electronic music, but the production and arrangement of the music is the most interesting. Staccato beats, electronic shivers and synthesized vocals add this level of fragility, which is incredibly haunting.

Looking at themes, the name of the album is taken from a series of paintings by German Surrealist artist Max Ernst. The Tate website (Adamou, 2016)[i] suggests the following about the work:

“The lack of detail or definition, along with the layered, textured structures, suggest that this might be a city in ruins.”

All of the tracks on The Entire City certainly falls in line with this assessment – although it starts with finding love and protection within a cityscape, it slowly dismantles and fades. A city in ruins with faltering relationships all round. The lyrics to the final track, Abandon[ii] (Walling 2009-2014), is a response to how we hold the physical so much more important than the people and relationships we hold dear…

Looking back at the work of Max Ernst, art historian Uwe Schneede suggests something different, that the works are a representation of what is left behind after a disaster (Adamou, 2016)[iii] – perhaps this can be seen in Gazelle Twin’s Entire City too?

As an EP, this definitely paved the way towards their next physical incarnation. This is a much darker beast (no pun intended), but no less ethereal – I think regardless of theme, Gazelle Twin’s voice will always have an ethereal quality to it. The themes presented here look at the human physique and the strength and beauty within, but also the fragility of it at the same time. As this is an EP, it is hard to go in to any great detail about themes, but it has a totally different sound to The Entire City. Reviews of the next album all seem to suggest that fans of The Entire City would be shocked by the change of pace and feel, but listening to this release as a stop between the two makes a lot of sense. There are elements of the ethereal beauty, but there is a darker, more industrial feel that is far more present which may soften the blow between releases. I can see how listening to both albums back to back may prove a little disconcerting to the listener, but I think this is what I admire most about Gazelle Twin; their changes of styles, themes and characters. There is a difficulty in knowing where their music will go next. 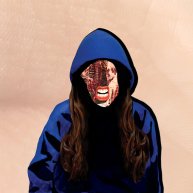 Starting with the most startling howl is certainly going to gauge a reaction from any listener (The Hidden City fans could easily be shocked), and starting this way suggests this is no easy ride – 38 minutes of it, which may seem short, but the emotional rollercoaster of it all makes it seem a lot longer. This was my album of 2014 for many reasons (Cables and Lipstick review)[iv] but mostly it was because the album was dark and uneasy, and explored some difficult territory. I hold some very strong views about women in electronic music, and how many seem to find their power in a much more masculine experience, when women can do so much more than that – Gazelle Twin did this for me. They explored personal pain, whilst using thoroughly strange and sometimes awkward sounds. I very much enjoyed how they used breathing and their own body to make beats and sounds, even using breathing as a percussive element. Exploring physical themes, and using sounds created using your own body is inspired.

Themes here are very much based on the physical body, mostly around suicide, puberty, illness and death, which explains the imagery of the character (blue tracksuit, facemask). I’m uncertain if they found any inspiration from philosophy, but there are symbols in their work that can be found within the work of Jean-Jacques Rousseau[v], even though he was more of a socio-political philosopher, but that’s a further discussion point (and not a digression for right now), as governments the world over seek to govern women’s choices and bodies.

Live is where their music really does come to life. The 2nd time I got to see them was at The Barbican in London (a venue that has also supported them as an artist). As the themes of Unflesh are very much around the physical, the performance of this is something quite mind boggling. At one point, they had other dancers on stage with them, dressed exactly the same, and of a similar physical build moving alongside them – like pure physical copies – it was a strange and utterly consuming experience. Did the physical copies say something about the bodies of women and how they’re viewed in society? It is difficult to say for sure, but the fact that their music allows me to think about the social views on women says a lot for their music. It inspires the ability to question and consider society, or at least it does for me, and will continue to do so for many years. I think anyone reading this article (mostly people who know me and my tastes to be fair), Unflesh will be uneasy listening, but rewarding, and possibly will be more immediate than previous work.

This release was very much a move in to mixed media. Throughout her live performances there has always been an element of image/use of video work, but this was a project with film maker and animator Carla McKinnon.

The music used for this was similar in scope to Unflesh – the dark, industrial beat to add to the visual horror. The film itself features ‘organic animation experiments exploring themes of puberty, the body, hallucination, anxiety and phobia using materials including coal, clay, milk, hair and meat’[vi], and it is an experience to watch.

I got to see this live at the London Short Film Festival in 2015, and whilst Gazelle Twin kept most of her performance quite low key, the film was really quite horrible in some places. I imagine using raw meat and animating it was deeply unpleasant, mostly from a smell perspective – I’m not squeamish about eating or cooking meat, but you don’t handle it for very long usually, animating it would take some very quick timing to get it right.  Also, in the film you will see the blue tracksuit character again, and within the film the character is seen to die. Is this their way of closing this chapter, and building a new character for their next album?

Gazelle Twin has always been a mixed media artist, but I don’t think they had the capacity to do something on this level before – working with other artists allows them to deepen their ability to create characters and furthermore, give a different perspective to the music.

Fleshed Out isn’t necessarily a work of their own, but a remix album of Unflesh. Remix albums are often quite tricky, but they pulled together an amazing selection of artists to rework their original tracks. I find the idea of remixing electronic artists quite difficult, especially when they are doing something strongly creative already – where does a remix take the vision? Perc’s cover of Anti-Body is oddly reminiscent of early 00’s power noise, think bands like PAL and Winterkalte. Wrangler’s take on Anti-Body (Stephen Mallinder (previously with Cabaret Voltaire), Phil Winter (Tunng) and Benge) goes for vocals as the strong point, even using Stephen’s own vocals on certain lines, overlapping Gazelle Twin’s; so it is possible to take electronic music in very different directions, depending upon your vision of the music. The whole album is extremely rewarding listening and adds an interesting slant, which a great remix album really should do.

To summarise, I’ve seen Gazelle Twin grow from someone who was inspired by another, but who has grown to be an artist with a unique voice all of their own. Someone who easily moves around the electronic music landscape, and who inspires others to do the same (see Fleshed Out). I’m not certain what is next, whether they will move away from the Blue Tracksuited Character and produce work under their given name (I have used genderless pronouns throughout as I have been discussing a ‘character’ rather than a person) or if their will be a new incarnation of Gazelle Twin yet to come. Whatever happens, I am excited to see what will be produced next, be it music, or full mixed media/film projects – it would be great to see them work with Carla McKinnon again as I believe they have a shared aesthetic which has yet to be fully explored.

There are other single releases, although not many, so I have focused on the album/EP releases, which means this isn’t a fully complete exploration on everything that has ever been produced by Gazelle Twin, but this should give those of you who have not listened before a bit more information to hopefully inspire you to take a listen, and those of you who have another perspective – which I would be very interested to hear about.